The American and British Studies Annual has just entered the second decade of its existence. We have decided to celebrate the occasion with a new design of the annual’s cover, replacing the old one depicting architectural icons of both British and American cityscapes with a new, minimalist graphic design inviting freer interpretations. Not only does it correspond better with modern aesthetics, but it also expresses the interdisciplinary character of our periodical. We sincerely hope that you will enjoy both the content and the new form.

In 2010, the American and British Studies Annual was enlisted in the National Index of Peer-reviewed Scholarly Periodicals published in the Czech Republic.

The journal is also listed in the SCOPUS database and in the ERIH Plus list (European Reference Index for the Humanities and Social Sciences) of the European Science Foundation (ESF) and the Norwegian Social Science Data Services (NSD). 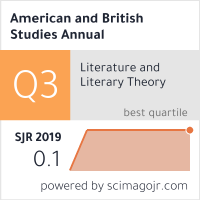 Contributions, reviews and announcements respecting guidelines for submissions are welcome at sarka.bubikova@upce.cz The deadline is 31 May.

All submissions will be subject to anonymous double-blind peer review. Our reviewers are experts from various universities and research institutions in the Czech Republic, Slovakia, Poland, United States and other countries.

By submitting a paper for publication in ABSA, the author agrees that its fulltext may be made available online in EBSCOhost database.